Dandeli and its surrounding areas are full of beautiful natural waterfalls that are a pleasure to see and spend time around. The ancient rivers and streams here navigate hard igneous rock formations resulting in the perfect waterfall country, where bodies of water twist, turn and jump around creating a symphony of treats and treasures for the senses.

Vajra Falls: One and a half hours away from Dandeli and near the village of Chandevdi lies one of the most spectacular and beautiful Waterfalls in all of India. Also called Vajrapoha Falls, here the Mandovi River falls for over 200 mtrs., creating a spectacular show for the senses. The surrounding areas are lush green and definitely worth a visit.

Magod Falls: Also called Magodu Falls, this is a series of waterfalls that fall from a height of over 200 mtrs. It is formed by the river Bedti when it falls from rock cliffs and collects in a clear freshwater pool. This forms a wonderful picnic spot where people can spend time photographing the falls or exploring the area around it. There is no entry fee for Magod Falls and it is open everyday.

Sathodi Falls: A number of stray streams unite at the mouth of Sathodui Falls and tumble over 15 mtrs. The waterfall has a characteristic rectangle shape and is popular due to the picturesque area around it. Like many Waterfalls in the region, there is a clear pool of water at its feet which can be used for swimming. There is a nominal fee of Rs. 5 for visiting Sathodi Falls and one has to walk for about 10 minutes to reach it.

Moulangi Falls: As the name implies, this waterfall is formed by the Moulangi River. It is one of the most popular waterfalls in the region and here, water sports are not only allowed but also encouraged. Visitors can participate in Kayaking, Boating, River Rafting. Picnicking and the much sought after Natural Jaccuzi which is very popular due to its perceived health benefits.

Anashi Falls: This is a beautiful waterfall in the midst of Anshi National Park that is hidden from sight and relatively unspoiled. The size of the fall changes considerably over the year and tends to dry up in the non-monsoon seasons. One has to be a little careful here because sometimes, small pebbles and rocks can fall down along with the water. The falls are at a good height with an elevation of over 150 mtrs and afford an amazing view of the surrounding areas. 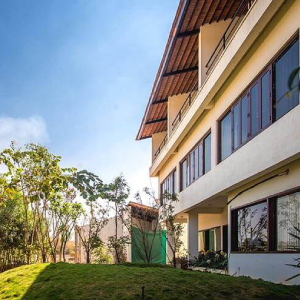